Winter Mountaineering With a Guide, the Perfect Training for Ambitious Climbing Ascents

For climbers, chasing new horizons that keep them motivated and push them beyond their limits is purely second nature. But what’s the best way of being sure if you are up for the challenge?

Mike, a seasoned rock climber from the UK, had an ambitious goal: climbing one of the big north faces of the Alps. With that long-term objective in mind he contacted Enrico through Explore-Share, and set out on a 4-day winter mountaineering trip in Italy with him to assess his climbing level.

Enrico is an IFMGA guide from the Aosta Valley, with an expertise in high mountain climbs. He takes clients to climb some of the Alps’ most mythical walls, like the north faces of Matterhorn, Grandes Jorasses and Eiger, often known as ‘the trilogy’. But before attempting one of these extreme climbs, he assesses the climber’s competence on a 4-day training clinic he considers mandatory.

‘What I look for in people willing to climb big difficult faces is obviously some basic experience and adequate skills, but most of all, the attitude is important. It needs to be someone calm, determined, passionate, willing to learn and to listen, focused on understanding what’s going on and not just wishing to put a cross on the mountain like “that’s done, I can tell my friends”, he explains.

For Enrico, the relationship between the guide and the climber is essential, as they will work as a team during the climb:

‘You put your life in the hands of each other. I want to know who is attached to the other end of the rope and I suppose a client would want the same’.

After postponing their trip once due to bad weather conditions, Mike and Enrico set out to the Western Alps. Their first stop was Cogne, an Italian village of the Aosta Valley, considered one the best ice climbing destinations in Europe. 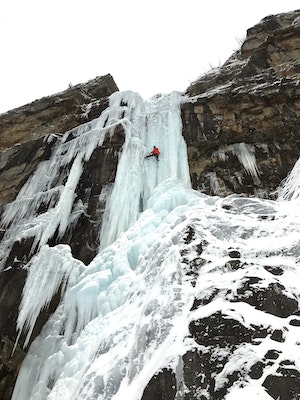 ‘During our first day we had to test and get to know each other in the mountains before going for bigger climbs‘, Enrico explains. Luckily, they were the only ones in the valley and had the entire playground for themselves.

‘Mike immediately looked experienced with rope manouvres and climbing skills. That was definitely a good start! Patry is not a very hard waterfall but a long and aesthetic line which sometimes can be ended by climbing the right steep pillar. That one is grade 4+ and 50 m long. We were the first ones of the season climbing that pitch, so it was a great experience’.

However, the high mountain conditions were not the best for ice climbing (is was still too dry), so the guide proposed Mike to move to the Dolomites, where they could find some beautiful gullies. ‘Being a climber from London he was not afraid of 7 h drive to go climbing, so we got all the kit on the car and left early in the morning’. 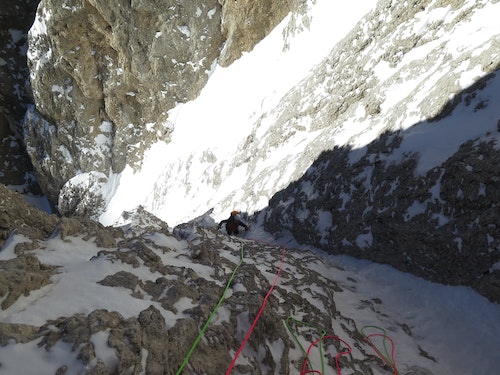 In the Dolomites, there were plenty of routes to choose. ‘All the routes were about 350 to 500m long with ice and mixed sections and grading going from WI4 M to WI5+ M5+’, says Enrico. The guide proposed to take Raggio di Sole + Cascata dello Spallone. ‘It is a combination of 2 routes on the shoulder of Sasso Lungo which involves a 2 h approach and about 8 pitches up to grade WI5′.

By the time they reached the route, there were other teams before them. ‘They were knocking down too much ice and being very slow, so I had to make a choice to avoid the danger’, explains the guide. ‘We could either to go down or engage on to the original (but less-climbed) exit of “Raggio di Sole”. It didn’t take me long to make my decision: I would lead Mike up to the summit through the direct exit. The day was good, he was in good shape, I felt I could trust him. From there, 5 mixed alpine pitches brought us to the summit of the couloir. As that part of the gully is not often climbed we had to go through re-building anchors for the descent’, Enrico says. 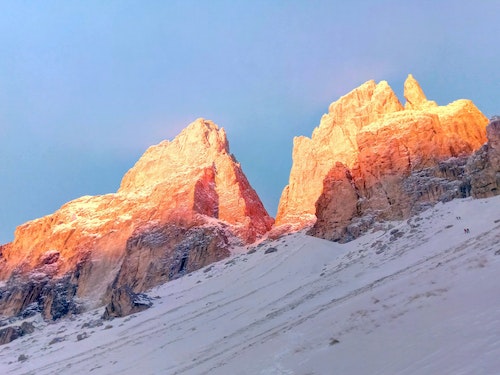 The last day they decided to tackle an easier climb called ‘Clean Gully’. After all, they needed to drive back 7 h to Aosta.

For this route, ‘the approach is a little longer and with the close by Mistica gully  this year they are quite busy. We managed to reach the people in front of us, so we were the first one on the wall, that was good! Pitch after pitch, some very aesthetic ones going under jammed boulders in the chimneys, and we were quickly on the top of “Torre Innerkofler” in the middle of the fog. The first thing that came up in my mid was to ask Mike: “now you really feel like being at home, right?” After a big laugh we headed down and were soon back at the car. Now a long drive in front of us but both very satisfied: we actually discovered new places and new routes together, as I also had never climbed those routes before. Discovering mountains with my clients is just so motivating!’ 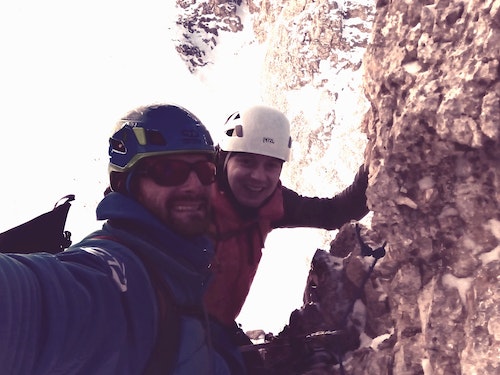 ‘I will definitely keep in touch with Mike for the future. He is definitely someone I could trust on bigger faces’, says Enrico.

Building a relationship based on trust and good communication is the first step to a successful climb.  For Enrico,

‘Climbing big faces and smaller faces for me it’s not just a mechanical movement that repeats 1000 times on the wall; it’s about sharing the experience, it’s about the team. That’s why skills are important but the human part of the partner is fundamental’. 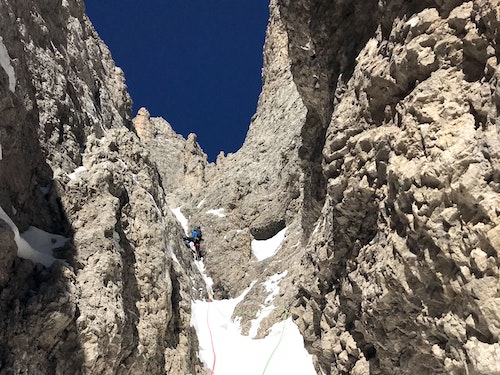 Ambitious climbing goals require careful planning, hard training and commitment. If you have a big objective in mind, going on a climbing trip with a guide is the best way to assess your abilities and improve your technical and physical skills. If you have some big climbs on your radar, contact Enrico and join him on a training clinic.

Want to know more about the epic climbing routes in the Alps? Don’t miss our article about climbing the great North Faces of the Alps!

Our experienced outdoor adventure team is ready to help you boost your experience and will assist you throughout the whole process, from the moment you choose a program until you return from your trip. 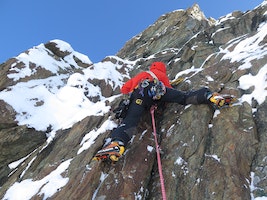 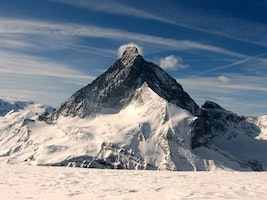 Top 5 volcanoes to climb in Ecuador

Stay up-to-date on the best adventures.